You may have heard that fashion is one of the most polluting industries. Apparently, it is second only to the oil industry and produces 20% of global water pollution. Jarring statements – but how true are they? What do the sources actually say? And how much raw data is available? We’ve done a deep dive to try and clarify some statistics surrounding the fashion industry.

Before we start, it’s worth talking about why we’re investigating. The purpose of this exploration is to put facts next to statements. We don’t want to discredit the idea that fashion is a polluting industry – it is certainly far from perfect. However, too often we’re coming across sweeping statements lacking sources.

We’re aiming to separate the facts from exaggeration and make data surrounding the fashion industry easier to understand.

One of the most common fashion industry statistics to see is that it is “responsible for 8-10% of global carbon emissions; more polluting than the industries of aviation and maritime shipping combined”.

Mainstream and reputable sites have reported this statistic, including the UN, the BBC, and the World Bank. Only the BBC provided a source for its claims and the trail led to another UN article. The problem? The aforementioned statistic doesn’t appear at all.

A few searches and a long trawl through a climate report later, we found the following data:

Assuming that we can trust the Ellen McArthur Foundation, there exists data to support the statement that fashion is more polluting than “aviation and maritime shipping combined”.

Unfortunately, the “8-10% of global emissions” proves to be a tougher nut to crack. Certain sites, like Common Objective and the World Economic Forum actually place the figure at 2-4%. Some sites take liberties in rounding up this figure (the World Bank article mentioned above).

The inconsistency is infuriating. But quantifying the fashion industry’s emissions is a difficult task, as we investigate further below…

The second most polluting industry, after oil

When googling fashion industry stats, one of the first articles that appears states that:

The source provided by Sustain Your Style is barely credible.

To begin with, comparing ‘fashion’ and ‘oil’ as industries proved nearly impossible. The term ‘oil’ was painfully vague. Does this refer to pollution from oil extraction and processing; or the pollution that oil causes as a fuel? In the latter case, we are attempting to compare categorically different types of data.

For argument’s sake, we decided to look into pollution and GHG emissions from oil extraction and processing. Our World in Data presents figures from 2016: 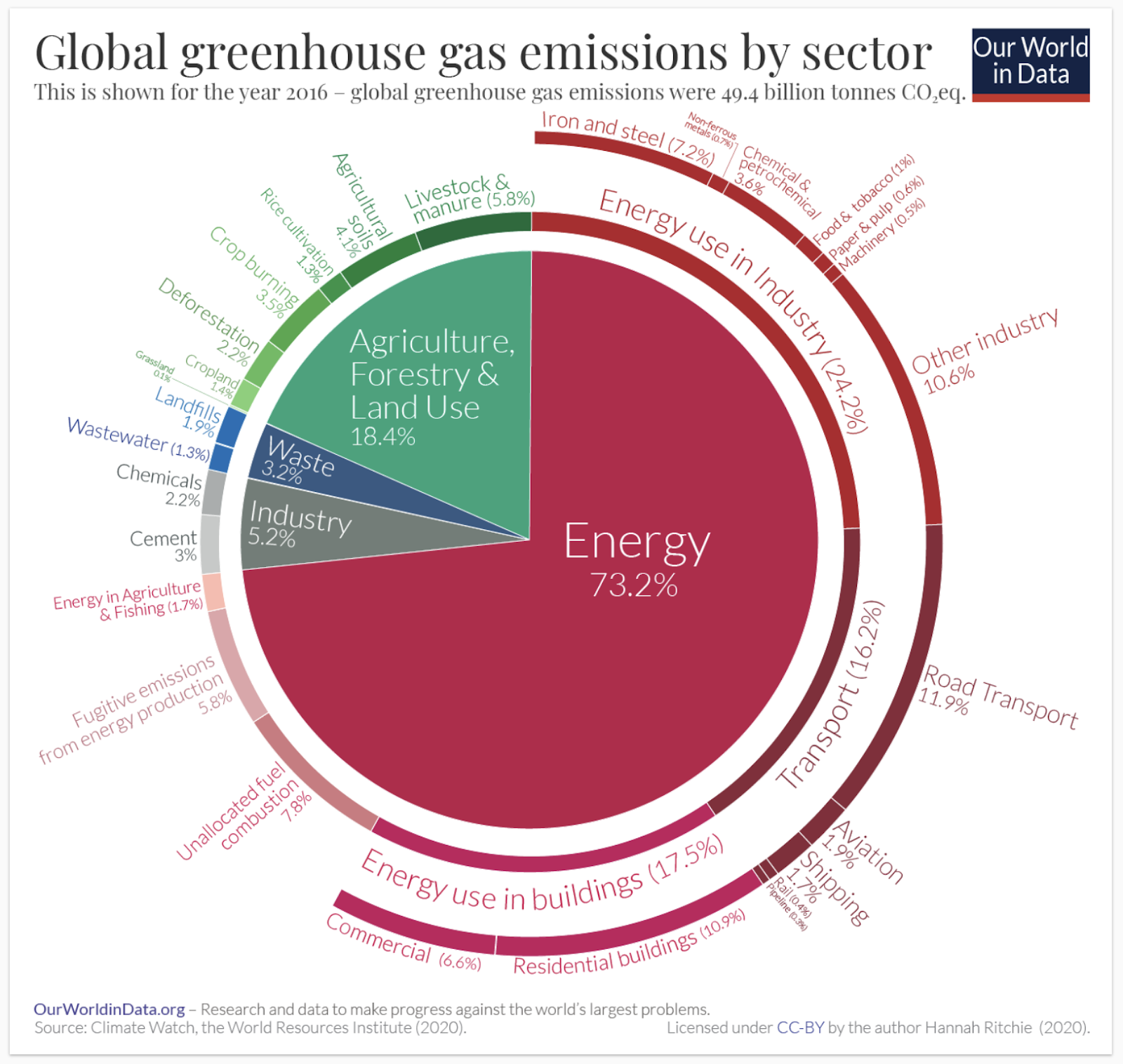 In the written breakdown, there are two categories under which the ‘oil industry’ could fall:

From the same report, textiles are categorised with “other industry” under the wider category of “industry”:

Then, the only other data we could find that breaks down oil consumption/ CO2 emissions by sector is from a 2000 report, that in 2022 is simply too outdated. For argument’s sake, however, we’ll include the graph. 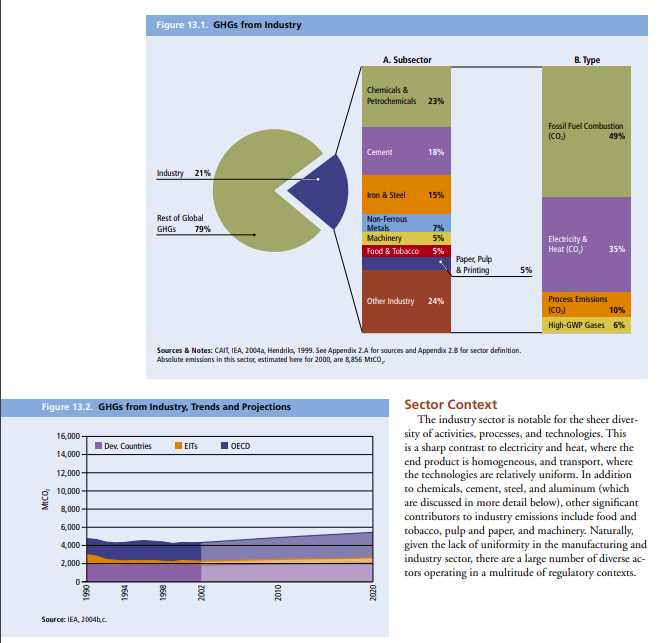 Conclusion: there is no conclusive data that supports the statement that the fashion industry is the second largest polluter in the world just after the oil industry. It is very possible that it is true but there does not exist a study that breaks down the data in the right way to argue this point.

Let’s take a look at the last of our fashion industry statistics. It is widely referenced that the fashion industry generates 20% of the world’s water pollution. Sources such as the UN, Florida State University and the Ellen McArthur Foundation article we referenced earlier have published this claim.

The UN article did not provide a source for such a claim. Florida State University links to this article by a business consultancy where we find another dead end regarding actual data. Finally, the Ellen McArthur Foundation provides this paper as a reference but even in this academic article, there is no apparent data to support it.

Reputable data resources couldn’t help us either. This report from Our World in Data doesn’t highlight the fashion industry anywhere, and Statista doesn’t provide any more clarification.

Mythbusted – but is anybody noticing?

After some digging, we came across an article that effectively debunked this statement as complete myth – which is where this whole business gets pretty interesting.

It appears that this statistic originates with a marketing campaign for AirDye. They needed to reframe the conversation around plastic fibres in order to make their profits, consequently inventing figures in order to push their agenda.

The article goes on onto describe how this – for lack of a better word – ‘rumour’ effectively snowballed. It was picked up by the Guardian and some years down the line, the UN, academic institutions and serious fashion publications. As the author of our mythbusting article puts it:

“AirDye is not an impartial and unbiased source on competing dye systems’ water impact, nor is it an academic, research, or international financial institution, likely to have access to the data and calculations required to make an authoritative assessment of global industrial water impacts. So it’s a very odd choice to use as a source in a professional analysis.”

One of the main conclusions for us is that it shouldn’t take a deep dive to find – or rather, not find – the data that supports statements that have the power to change an industry. Why weren’t the sources checked better from organisations such as the UN and the Guardian? It makes us wonder how many of the numbers flying around fashion and sustainability can be believed.

Misinformation is not uncommon. With sustainability around fashion becoming an increasingly popular conversation, it’s absolutely crucial we’re clear about the problems and the impacts. It should go without saying that news publications have the reponsibility to provide credible sources.

And if we could find fault with three of the major fashion industry statistics, how many more aren’t accurate?

MPLG Ltd is a private label manufacturer of premium quality bags, backpacks and wallets, in leather, synthetics or textiles, for international brands. Established in 1976; we have capabilities and expertise in every area of sampling and production. We make all items in our own factory in Manchester, England.

All content and opinions stated here are to the best of our knowledge, true and correct. We cannot be held liable for any unintentional errors or omissions. We recommend that you make your own detailed enquiries before making any decision based on the above information.

MPLG Ltd is a private label manufacturer of premium quality bags, backpacks and wallets, in leather, synthetics or textiles, for international brands. Established in 1976; we have capabilities and expertise in every area of sampling and production. All items are made in our own factory in Manchester, England.

Email
Send us an email